America’s very first city was established in 1565: St. Augustine, a place that is built on courage, knowledge and, above all, creativity. St. Augustine is a location that holds in its past a list of artists and entrepreneurs. And when it comes to females who worked hard to make St. Augustine the best of the best in the country, there were many that rise to the top of the list. To name just a few…

Maria Andreu was a very famous women who was the first female to serve as an official lighthouse keeper. It was the town of St. Augustine that rallied around her and worked hard to ensure that Maria was granted the post. It was in 1860 that she earned the title official “U.S. Lighthouse Keeper,” not to mention, the first Hispanic-American woman to control a federal installation on shore.

Living and working at the St. Augustine Lighthouse, upon the death of her husband, Maria kept her 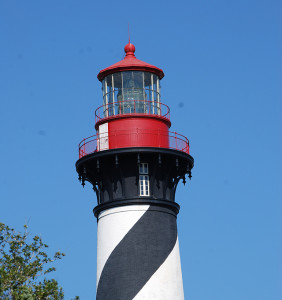 position as lighthouse keeper until 1862, when the outbreak of the Civil War occurred. It was soon that the lighthouse beam was snuffed out under the laws of the Confederate Secretary of the Navy, with the mayor of St. Augustine removing and burying the lens once and for all. As of 1939, however, the lighthouse became a part of the U.S. Coast Guard, which now honors Maria as its first female employee, as well as one of its earliest Hispanic members.

When it comes to discovering more interesting females that make up the tapestry of the highly creative backbone for the oldest city in the country, Isobel de los Ríos deserves a great deal of study. Isobel lived in St. Augustine back in the late 17th century. A free African-American, she sold various baked goods out of her home, which eventually categorized her as one of the very first female entrepreneurs.

And when it comes to the celebration of the written word, Zora Neale Hurston became a well-known author who made sure to chronicle early life and southern black folklore. One of her most well-known works is her own autobiography, titled: “Dust Tracks on the Road.” This incredible work was written while Hurston was living in St. Augustine in 1942. From her rented room on West King Street, she also taught college courses at the same time as she produced this award-winning and highly controversial book.

Another highly controversial writer came in the form of Mary MacLane, a woman known as the “Wild Woman of Butte.” She was a highly popular author who brought debate to the public with her words, and while wintering in St. Augustine from 1903–1908, MacLane was in charge of ushering in “autobiographical writing” that would one day expand into a huge industry.

Turning from the written word to music, located in the world of opera, Louise Homer was a singer that will never be forgotten. Louise, a contralto, lived an international career that spanned from global concert halls to opera houses until her retirement in 1932. Others that were part of making St. Augustine’s music industry memorable were Sidney Homer, Louise’s husband, an American composer, and their nephew, composer Samuel Barber.

From the written word, to the stage, to the skies (in the form of Patty Wagstaff, aerobatic pilot), St. Augustine, Florida, has continuously been the home for the most artistic, original, and hardworking females in the United States. Whether looking for the best in music, or the most intelligent businesswomen of our past, this is one city that offers up all facets of pure, undeniable genius.

The folks at St Augustine ECO TOURS offer the best in ECO Adventure on the Matanza Estuary.

From History to Beauty the Matanzas Estuary is Home to Both Grizzly Gulch Trail, Grizzly Lake Episode One