The Mystery & Myths of the Badlands

The Mystery & Myths of the Badlands

Badlands National Park is not only one of the most amazing scenic spots in the world, but it is also one of the most eccentric. That area is a type of other-worldly experience, as if the land holds mysteries and myths hidden deep within the buttes. The high rock formations seem to dare and challenge you to reach the top; perhaps climb as far and fast as you can in order to meet the people who are still roaming there – just beyond your line of vision. 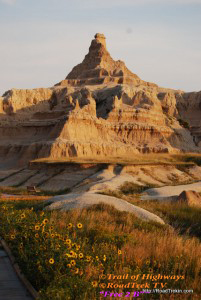 Over 11,000 years of human history have been recorded in this truly amazing area. The 250,000 acres filled with awe-inspiring pinnacles and spires that reach to the sky look as if they are used as an elevator by aliens to reach the spaceship they left behind. But then, those massive shapes meet up with the most expansive protected grass prairie in the whole United States, giving the Badlands National Park two extremes that offer a home for wildlife, a place for the perfect picture and, perhaps, the hidden ‘homes’ of those spaceship dwellers.

Speaking about aliens is not out of the realm, or even over-imaginative when it comes to the Badlands. In fact, this area has more myths and legends than any you could possibly think of. Here, you will find unknown tracks in the mixed grasses, along with archaeological findings of Indian Wars, remnants of gold mining and, of course, the requisite ghost towns with silhouettes of everyone from gunslingers to the fancy brothel girls walking amidst the desolation.

The Badlands fill people with fascination for a reason. Evidence found show that this is an area that can be dated back thousands of years to the first nomadic tribes that made the Badlands their home. This was the hunting grounds of the Paleo Indians, mammoth hunters who were alive at the end of the Ice Age. The hunting inhabitants continued to come, with the Badlands being the place for the roaming buffalo.

Harsh weather, long freezing winters that never seemed to end, and some of the most difficult terrain possible for both dwelling and hunting, is what the Badlands provided long ago. It was about a century and a half in the past, that the Great Sioux Nation had displaced the other tribes 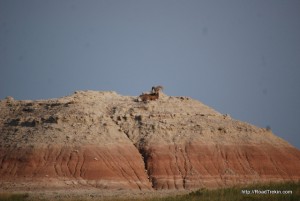 from the northern prairie, commanding more than 80 million acres. And the Badlands term was not just created by recent people. In fact, the Lakota Sioux called the place ‘mako sica’, while early French trappers called it their own phrase – both meaning ‘bad lands’. Whether they named it such for the weather, the harsh terrain, or simply the ‘creatures’ and other frightening events that took place there that were never recorded, no one can actually say. But soon, everyone from soldiers to miners to farmers took over the area and became a part of Badlands history. Even Lewis and Clark making their famous trek in 1803, passed through the territory.

However, as time moved forward, the populace increased. First the trappers, then the explorers, then came the Wild West rough and tough that would make history books for their more-than-interesting lives. It was the will of Congress in 1862, passing the Homestead Act, which was responsible for bringing everyone to the Badlands. Emigrants could purchase 160 acres of land for around $18, and as the lands filled, the Sioux and new settlers began to have issues. The Fort Laramie Treaty of 1868 established the Great Sioux Reservation, and ceded all lands from the Missouri River west to the Bighorn Mountains of western Wyoming to the tribes. Hostilities ceased…but only for a short time, as new battles began and another, more military, part of history was made. 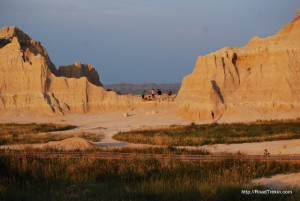 One myth that still reigns to this day is that frightening creature that may still roam the Badlands. Oddly enough, the legend was begun by the Irish, who elevated the Banshee of the Badlands to a unique status of horror that even Stephen King would love.

A ‘banshee’ is a female ghost known for a shriek that literally makes the blood run cold. And according to the Irish, the Banshee of the Badlands would appear out of the darkness to members of certain clans to warn them of their soon up-and-coming death.

The banshee was certainly far away from its Irish roots; however, it was said that a woman did lose her life near a butte in the Badlands called, ‘Watch Dog’. And ever since then, everyone from hunters to cowboys and war parties passing through the area claim they have heard the shrill shriek of a woman warning of death.

So whether you are looking to find ghosts, legends, or just experience a truly sacred place, head to the Badlands and witness a unique history you will never forget!